This man has made me cry on two occasions. In a good way. All he did was share some of his story and some of his wisdom. That was enough to make me scrunch up my face in that awkward and uncomfortable way that leaves you in longing. Longing that no one turns around to see  your tears, longing that you had picked up your sunglasses that morning and longing that you don’t sneeze and ruin the powerful and goose bump filled moment.

The last time he made me cry was in the Hospital Conference room. A dark and dingy room with no desire to hide the fact it lies in the hull of an old ship. It’s nothing fancy. It was 4 o’clock in the afternoon and we were celebrating. It was the last day of work for our Day Workers, the Congolese people that had given their time to work alongside us for 10 months. Some were translators, some were cleaners, some were sterilizers and some physiotherapy assistants. That day was their day. The day where we all took time to celebrate them. They cheered and whooped as they saw their own faces on a rickety projector screen. There were drums and certificates all over the place. Big smiles, big laughs and a room full of love and gratitude. This was a deserving occasion for those Sapuers to get their best suits out of the box and shine.

Although the event was an exciting and fitting tribute, there was an air of sadness. The party was clouded by an unspoken inevitability. Their big white ship was leaving. Their home and friends and jobs were being uprooted and relocated all at once. The beginning of the field service was tricky and the relationship between Mercy Ships and its Congolese day workers was definitely not love at first sight. But the love came, sometimes in unexpected places, in the form of tears as we left, from some of the biggest and strongest men.

As I sat and watched the presentation unfold, the woops and cheers and the certificates circulate, a man came to address the crowd. He came to deliver a speech. A word of hope.

They, like me,  sat mesmerised; but this speech wasn’t for me. He addressed this group of men and women as if they were his own brothers and sisters.  He told them some of his story…

Papanie is from Sierra Leone, he grew up in a war torn country and describes him self as coming from the streets. His father died when he was young and two of his brothers died in childhood. Because of this people said his mother was cursed and she belived it too, she thought she would kill her son if he stayed with her. So Papanie was taken in by his aunt and started to work at the age of 5. He says the work was hard and at the age of 15 he decided being on the streets was better. So he started to make a new life for him self. As my friend sits and explains his story, the word he uses many times is ‘abandoned’. Papanie had a turbulent start to life and knows hardship. He has also known discrimination and humiliation. During his early teenage years he developed a limp due to a damaged leg and hip after years of  intensive labour.
Whist on the streets Papanie was helped out by an organisation called  Word made flesh they helped him to go to school and showed him kindness and love. In 2011 Mercyships docked in freetown and Papanie got a job as a day worker. He cleaned the wards and took care of the laundry and loved every second of it.  In 2012 Panpanie came to live on this ship as long term crew. This was made possible through the contacts he made at Word Made Flesh. He is now head of hospital house keeping on the Africa Mercy.

As he addressed his audience he told them how he grew up on the street, how he worked for Mercy Ships, and how he felt hopeless when they left. He talked about how he prayed and how God answered his prayers as he became a Crew member of the Africa Mercy. His dreams and prayers came true. He didn’t share this to boast but to encourage our Congolese friends that they were not being left behind. God was with them and would hear their prayers too.

“God has a plan for you, just like he had a plan for me, it may not be the same and your dream might not be to be a crew mate on the Africa mercy but God knows your heart and he hears your prayers whatever they are”

And then there was hope…

From a man that once had nothing but has found everything in God.

The cloud of uncertainty and sadness wasn’t completely gone but this group of people were encouraged and strengthened by this man. And so was I. 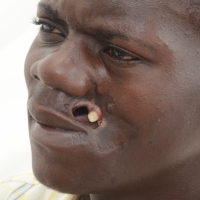 Search through a porthole