NOMA (Cancrum Oris) comes from the greek and literally means to devour. It is an oral and facial type of Gangrene. In Ghana they call it the melting disease. Both of which are pretty good descriptions. Because it does just that – it devours away at the flesh and whole bits of people faces are gone within no time at all. In other cultures it is likened to a galloping horse or a blowing wind because it claims it’s victims quickly.

According to historians it was first recognised in 400 BC and has long since left industrialised societies since the 19th Century. The last cases of NOMA recorded in the West were found in concentration camps such as Auschwitz and very occasionally it has been seen in HIV patients who are receiving intense immunosuppressant therapy.

But this is a current disease found today in Africa and not in concentration camps, but in everyday lives of everyday people. Our Surgeon here refers to it as the face of poverty. And I guess thats what it is … a disease associated with the poorest of the poor.

So who are the victims? Why do people get it? And why have you never heard of it before?
The victims are children. Typically between 1 and 4 years old. The children that acquire NOMA usually, as well as living in extreme poverty have compromised immunity. NOMA is normally preceded by an illness which weakens their immune system. Common examples are measles, malaria, diarrhoea or premature births. So the child is under the weather but due to poor sanitation, hygiene and nutrition they are at a much higher risk than other children of acquiring an opportunistic bacterial infection like NOMA. Its an infection which in a healthy child with a healthy immune system would be controlled and fought and the child would be victorious. But in my friends like Guy (above), Natalie and Robin (below) they were not victorious and could not fight the infection.

NOMA commonly starts of as an ulcer or a spot inside the mouth which becomes swollen and infected and then it spreads. The swollen skin quickly develops into a massive necrotic area. With altered blood flow the tissue can literally fall off the bones and the bones can dissolve. My friend Robin tells me he got a pimple in his mouth which quickly got much much worse until his face “fell off”. He went to the witch doctor who said it would spread and he would die. The witch doctor said there was nothing he could do. In most cases this is true.

At home I have treated patients with similar conditions such as necrotising factitious – a soft tissue infection. This also spreads quickly and results in skin loss. This like most normal skin infections spreads along cellular spaces. The difference with NOMA is that it spreads further and deeper. It can spread through anatomical barriers as you can see from my friend Natalie below. She has lost most of her nose, jaw and cheek. The bones and muscles have been dissolved away.

NOMA can be stopped with simple antibiotics and mouth washes but many of the victims don’t have access to good health care. And many don’t present themselves even if there is help available. Once the acute phase is over and if the victim survives, the skin heals, leaving behind a terrible scar which will leave the person at risk of more problems. Physically this means many survivors can not adequately eat, speak or see, depending on what area was affected. Many get a fixation of the jaw and so feed themselves whatever they can by whatever means. Guy would feed himself through the hole by his lip. Psychologically these patients arrive for treatment covered in headscarfs that they are ashamed to removed even for the doctors to assess them. They are marginalised in their societies. Robin – shown below enjoying the festivities on the ship – can’t read or write and he can’t speak the national language. This is because he couldn’t go to school, his scarred NOMA face wasn’t welcome there. He is 16 years old. 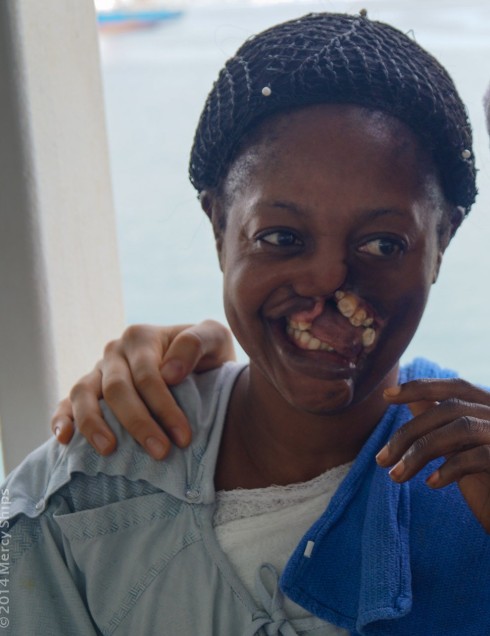 Guy above also didn’t go to school and can only speak what is referred to as a village language. In Congo all formalities, exams and job applications are carried out in French so these boys are at a major disadvantage. Guy was an orphan and taken in by a village chief – he has had his first surgery and is recovering well. He will return for further surgery soon. Robin is undergoing a few reconstructive surgeries and is currently recovering on the ward from a large skin graft. Both Robin and Guy are young and hopefully have a long life ahead of them with a new face.

Natalie had a big surgery last week that included multiple skin flaps and grafts. Hopefully I will be able to include some pictures of her story one day. She is an incredible women always smiling and laughing, singing and dancing. She got NOMA when she was 3 years old. She has lived with a disfigured face for 20 years.

Natalie before her operation, always smiling.

A sneaky peak into one of our operating rooms… where the magic happens.

Natalie, her sister and her Nurse having a laugh.

Robin and some Nurses enjoying Christmas on a ship and the musical tie my mum sent from home- Ma that was a winner! 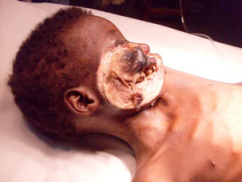 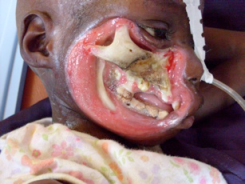